How to organise a conference for students... by students

(Scroll down for the Spanish version)

The BEE (Behaviour, Ecology and Evolution) PhD student conference ran inaugurally on the 7th and 8th April 2021, hosting 66 presenting student researchers from 43 different institutions across 5 continents. Originally conceived in 2019 as an in-person event to be hosted at Merton College, Oxford, in the summer of 2020, we sought to market locally in the South of England, attracting students via DTP (Doctoral Training Programme) networks and by word of mouth. Two years and a pandemic later, we never imagined being able to call ourselves an international conference. This blog explains a bit about our journey in the format of a list of do’s and don’ts; personal advice for organising an event like this. 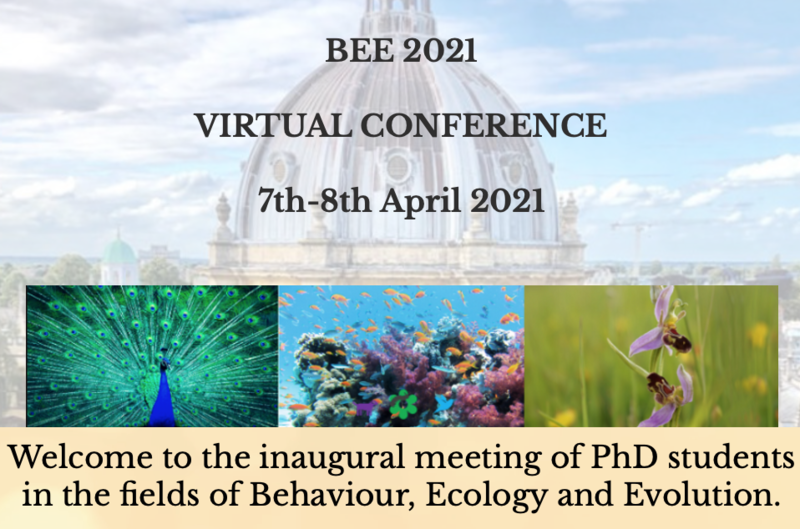 Victor Ajuwon (co-organiser and PhD student at Oxford Zoology) and I are friends, live together, and generally agree on most things (bar his competency to clean). We would often sit for hours after dinner and discuss topics from sexual selection to statistical methods (we’re really fun). It came as no surprise to me on a walk through the temporary Oxford Zoology Department in 2019 when Vic greeted me with a thought-provoking idea, ‘What do you think about running a graduate student conference?’. I was immediately engaged. We spoke for the next 2-3 hours that day, deciding on what we wanted to achieve and how we wanted to do it.

Our first priority was that we needed more people, for two reasons:

We reached out to Sara Middleton, a PhD student also in the SalGo Team, and Matt Jordan, PhD student at the Willis lab @ Oxford, and who also studied undergraduate with Vic and myself. Immediately we noticed the benefits, both in terms of reducing the personal cost:benefit ratio of undertaking the project, and the avenues the conference proceeded to go down. We could split tasks according to our skills, and our aims were diversified and refined. Our main goal was to craft a conference that was specifically beneficial to PhD students. It was perhaps no surprise that adding more, and importantly different, viewpoints of PhD students enhanced the success of our conference. There is obviously some trade-off with number of organisers you can have, and three1-four worked well for us. If I were to do this again (perhaps next year…) I would recommend sending out surveys to prospective attendees, in order to gage what might be most useful to them, allowing you to cater to a wider range of mindsets.

To summarise, it is obviously a great thing to work with friends, but you run the risk of confirmatory biases of similar mindsets. Try to avoid this. Besides, by the end of the process, unless you’ve killed each other, your recruited colleagues become your friends.

Building a team is just the first step, creating an efficient division of labour is the next important task. Divide based on both skillsets and personal preferences, and perhaps rotate in the first few weeks of organising if time allows to enable you to find the best strategy. The ‘best’ strategy tends to be the one in which team members are most happy, which subsequently leads to the most productive working state. Furthermore, make sure you’re all accountable for what you do, set goals at the end of each meeting detailing what you’ll do before the next time you meet. Hold yourself and others accountable if this work doesn’t get done.

To allow your team to work in this way, it is imperative to establish an honest and open working relationship between team members. Establish this quickly by learning and adapting to each other’s thinking styles. Again, avoid thinking one's way is the right way; instead, listen and learn from others. Encourage everyone in your team to have equal amounts of talking time during the meeting, get to know each other more personally, and be honest about when certain weeks may be more difficult to get things done than others. This working environment was something I’m proud to say we got very right with BEE. Everyone was comfortable in voicing their opinions, and we all displayed great flexibility with each other. This style of work allowed us to sift through a myriad of ideas and discussion points during meetings. We would often be able to isolate the majority of our weekly working time on the conference to these meetings, allowing us to spend the rest of our time on our PhD.

So far I’ve mainly discussed the importance of your team, and this is because, taking inspiration from the 80:20 rule, I think the majority of the success of any event like this comes down to the working relationships of the people organising it. The remaining 20% of advice is more technical, and the specifics of which will likely be determined by your context. Either way, I’ll try to provide the advice I consider most widely applicable in a time order from conceiving the idea of the conference to physically running it.

My overall experiences of co-running the BEE conference were positive, but my final piece of advice would be to not underestimate the time and emotional commitment. Establishing an effective working system with your team can help, and did greatly for me, but it doesn’t fully detract from the overall amount of time and emotional energy that you are taking away from your PhD. Nonetheless, if it is manageable for you to put your full effort in to both, do it!

If you find yourself thinking about hosting a conference, I hope the above can help, and please don’t hesitate to get in touch.

1. Although Matt later decided to drop out of the conference organisation, his work was foundational to the conference’s aims and ultimate success. I’d like to take the opportunity on behalf of Vic, Sara and I to thank him for all his work.