Associate Professor in Ecology Dr Rob Salguero-Gómez and his international colleagues released the new versions of the COMADRE Animal Matrix Database and the COMPADRE Plant Matrix Database, which can be found here.

COMPADRE & COMADRE (for short, and to confuse a little bit the non-Spanish native speaker!) constitute the two more comprehensive “Noah’s arks” of demographic information in the Plant and Animal kingdoms worldwide, respectively. The most recent version of COMPADRE (5.0.0) contains 9,121 matrix population models detailing the demographic schedules of 760 plant (and red and brown algae) species, from annual species to redwoods and anything in between, all carefully collected from 941 archived studies around the globe. Likewise, COMADRE (version 3.0.0) contains 2,227 matrix population models for 446 animal species, from corals to humans, digitised from 558 published resources. 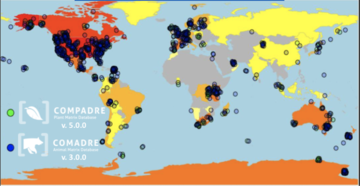 In addition to the demographic information archived within these matrix population models, Dr Salguero-Gomez' team and his collaborators have gone through the arduous task of building a phylogeny,  teaching materials, a user manual, and two R packages that help the user manipulate the database (Rcompadre) and derive demographic and life history metrics from each matrix population model (R-age), thus greatly adding ecologists, evolutionary biologist and conservation biologist in using the known demography of the sampled species across the tree of life to address multiple research questions.

Indeed, the usage of COMPADRE & COMADRE has resulted in over 40 publications in peer-review journals (see here), including Nature, Nature Ecology & Evolution, PNAS, or Ecology Letters. “It is our hope”, said Dr Rob Salguero-Gómez, “that by making these data, our developed tools and analytical approaches open access, we will encourage many researchers to avail from these vast amount of information to ask global questions in biology through the lens of demography".

This effort, which is the product of an international consortium centralised by Dr Salguero-Gómez at Oxford and involving multiple institutions such as Lincoln Park Zoo (USA) and the University of Southern Denmark, is currently supported by a NERC and NSF grants.