(Scroll down for Portuguese version)

It is with great pleasure that we officially announce the success of two incoming research fellows, Dr Maja Kajin and (soon-to-be Dr) John Park, who, thanks to the competitive support of the Marie-Skłodowska Curie Actions, will soon be joining the Salgo team. Below, a bit about them, their background, and what they’ll be working on with us once they join us in a few months:

My name is Maja Kajin (pronounced /Maya Kayin/, Fig.1). I was born in Ljubljana, Slovenia (ex Yugoslavia). I will be joining The SalGo team at Oxford in summer/fall of 2021 within the Marie-Skłodowska Curie Individual fellowship scheme. 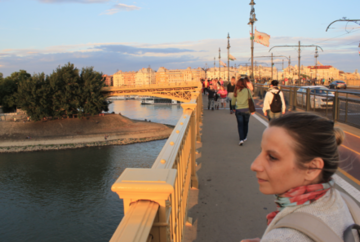 I studied Environmental and Resource Management at the Brandenburg University of Technology, Cottbus, Germany. This interdisciplinary study course provided me with an engineer’s point of view, which was crucial for my later development as a population ecologist and modeler. This degree also took me to a 6-month exchange program in Brazil where I fully developed my passion for ecology. The time spent in Brazil allowed me to meet a part of this wonderful country, especially eye-catching to ecologists for its outstanding biodiversity. I fell in love with the Atlantic forest (Fig. 2), which convinced me to come back to Brazil two years later, after obtaining my BSc in Germany. 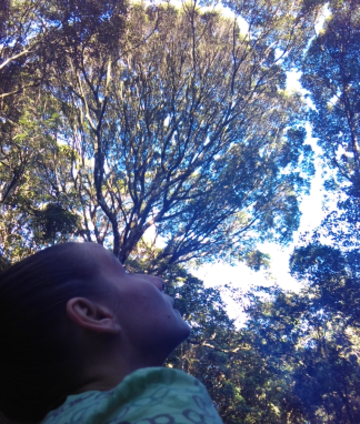 Captivated by the complexity of the Atlantic Forest, I took up a Master's program in Ecology at the Federal University of Rio de Janeiro, continued to a Ph.D. program in Genetics (population genetics) and a post-doctoral position at the same university. By the end of my post-doc, I’ve fully developed my passion for population ecology joining the three fields of biology I’ve learned - ecology, population genetics, and demography. Since 2012 I lecture Ecology, Population Ecology, and Ecological modeling at the Department of Ecology, State University of Rio de Janeiro. At the end of 2018, my partner Cezar (Brazilian artist - painter) and me returned to my home country, Slovenia, where I took up a sabbatical, joining the Group of Animal Ecology at the Department of Biology, University of Ljubljana. In 2019 our son Vincent was born.

Throughout my academic path, there was but one particular aspect of natural populations that fascinated me most: the tremendous variation of life-history strategies (for example, the “choice” of living a long life and reproducing only once in a lifetime versus living a short life and reproducing many times), and variation of population vital rates (such as survival and fecundity). These strategies vary tremendously throughout species, populations, and individuals, and can be easily observed in nature. Such a variation is a response to changes in environmental conditions (among others) that wild-living populations need to face to persist. With the challenge of understanding how the environment affects the variation of life histories and vital rates, I was lucky enough to meet Rob Salguero-Gómez. With his help and support from Tim Coulson, the ideas began to take shape - and ultimately resulted in a recently granted Marie Curie project named MaxPersist.

With MaxPersist, I will examine at Oxford how anthropogenic changes may push plant and animal species out of their life-history optima. It is a known fact that the Planet is witnessing now more droughts, fires, flooding, and other extreme events, while global climatic models forecast drastic changes in environmental conditions. How will this influence the life-history strategies of plants and animals? Will the number of offspring of those species that typically produce constant litter numbers start to vary more to survive the increasing environmental change? Can populations develop novel demographic strategies to persist increasing environmental changes in time before it’s too late? In MaxPersist I, under Rob’s supervision and a carefully chosen group of world-leading scientists, will develop novel theoretical advances to better understand how life-history strategies of natural populations worldwide may change, and use this knowledge to predict how populations of hundreds of species worldwide will persist in the face of increasing environmental changes (Fig. 3). 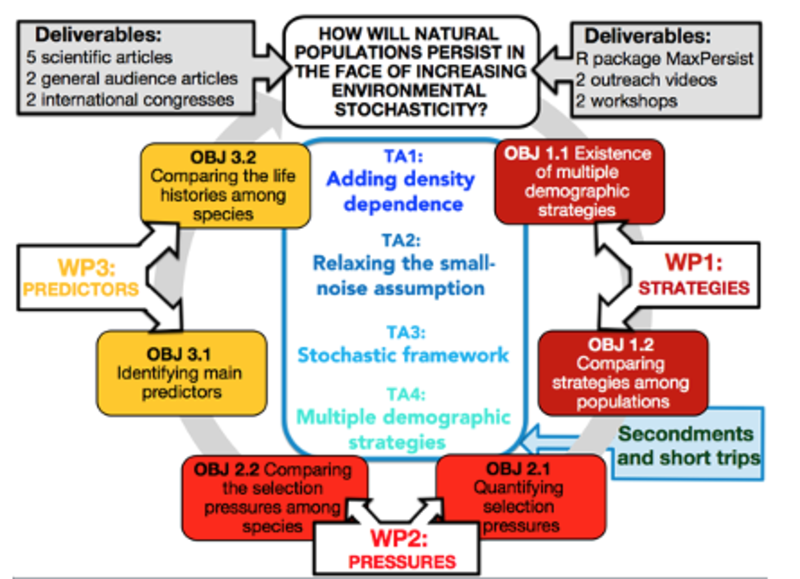 I’m very grateful to have the opportunity to join a team like SalGo. The time in Oxford will be crucial for my further professional development as well as an important personal experience. I’m looking forward to the motivating scientific debates as well as leisure meetings and conversations with the incredible team members and collaborators.  I’m excited to finally put the ideas of MaxPersist, which have been intriguing me since a long time ago, into life! This wouldn’t have been possible without joining the SalGo team.

Hello all! My name is John Park (Fig. 4). I am thrilled to join the inter-disciplinary/-national SalGo Team and Oxford in the fall of 2021 as a Marie-Skłodowska Curie Individual Fellow. 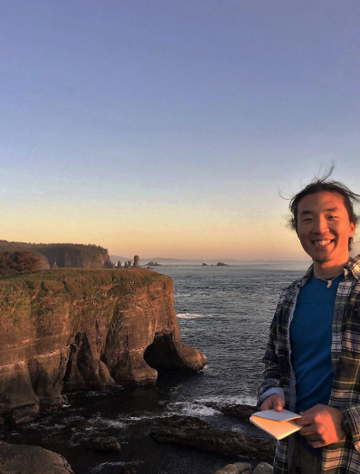 I began my ‘life-history’ in South Korea, and immigrated to spend much of my juvenile and adolescent life stages in Toronto, Canada. The Canadian north—the remoteness, the colors, the expansiveness—inspired an early thirst for adventure, and a passion for understanding and conserving wilderness (Fig. 5).

I studied Ecology & Evolutionary Biology at Yale University in the U.S. for my undergrad, where my mentors Dr. David Post and Dr. Steve Stearns were hugely influential in instilling in me an excitement for asking big questions. In particular, I became captivated by seasonal patterns of life (e.g. flowering, emergence, migration, reproduction) we see all over the world, and how life-history evolution and ecological theory might elucidate deep causal forces behind such universal phenomena. I have had the fortune of pondering the evolution of seasonal biological patterns while living in the remote Canadian arctic for three full seasons, in freshwater lakes of northeastern U.S., in the woodlands of Australia, and in the high arctic archipelago of Svalbard, Norway. My passion for understanding these phenomena drives me to this day, and shapes much of my future research interests.

I began my PhD at the University of Chicago in the lab of Dr. Tim Wootton to work on general and scalable theory of life-history evolution in oscillating environments. I honed in on copepods living in wave-splashed rock pools of the U.S. Pacific Northwest coast as an ideal system to gather high volumes of detailed data quickly over a couple of field seasons. I then ran a long-term experiment in the lab with the copepods to recreate and manipulate the natural selection dynamics of life-histories. Through my three-pronged approach consisting of theory + testing it in nature + experimentally studying the mechanisms, I learned that regular cycles in the environment—such as seasons and tides—exert a complex but tractable force shaping the distribution of life-history strategies in dynamic populations.

My Marie Curie project “CyclesOfLife” (Fig. 6) will be an exciting adventure in many ways. I hope to expand my horizon while deepening my understanding of how life-histories and phenologies (timing of biological events) evolve. First, I will be taking my first dip into the world of plants. Second, I will integrate macroecological and microevolutionary perspectives with my collaborators to enrich the theory. Third, I am thrilled to work with the SalGo team and colleagues to harness big data such as COMPADRE to test and refine the theory at ambitious global scales. 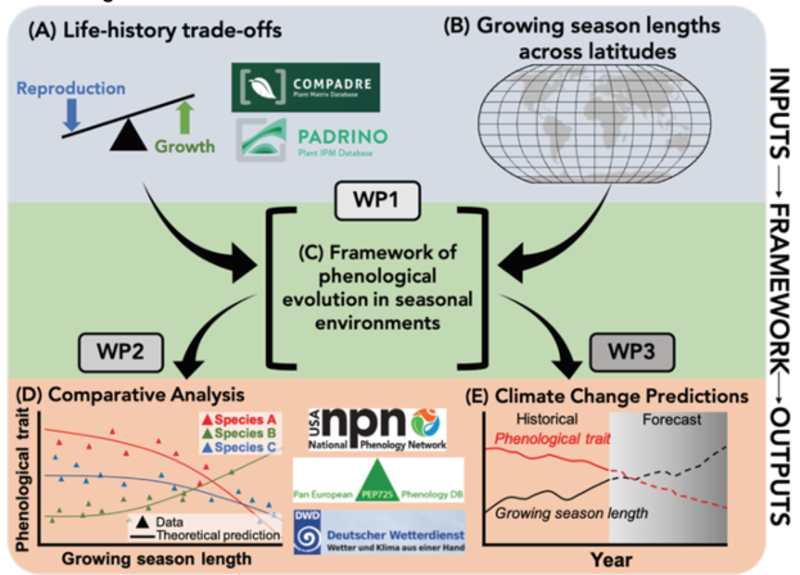 Climate change has been distorting the seasonal patterns of the physical environment all over the world, but much of the eco-evolutionary consequences for biological cycles remain a puzzle. It is both fascinating and alarming. CyclesOfLife is aimed at establishing a unified eco-evolutionary framework of phenological change, and making theoretically grounded forecasts under climate change scenarios. Beyond my project objectives, I am excited and grateful to be a part of the highly creative, productive, and welcoming communities of the SalGo Team and the Department of Zoology at Oxford. I am always keen to chat about ideas, and conjure up creative collaborative pursuits – both scientific and outreach.