From Galway with Bayes

[ENG] Last week, SalGo team’s Connor Bernard and Jacque Deere headed to the west coast of Ireland to attend a BES Bayesian Macroecology workshop at NUI Galway. These are a few reflections from their trip by SalGo team PhD student Connor Bernard. 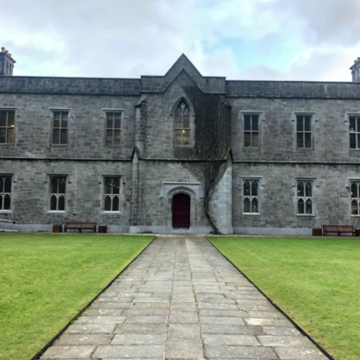 University Quadrangle at The National University of Ireland Galway.

The travel to Galway was about as good as one could hope for. I took an early flight to Galway in the interest of daylight*. This itinerary afforded me the privilege of sharing a shuttle to Heathrow with Prof Steven Stearns, who had been visiting Oxford and giving a seminar on senescence in days prior, making it one of the more enjoyable shuttle rides of my life. We talked life history, colorful corvids, and ageing – the good stuff. Once at Heathrow, the lines were nearly non-existent (for reasons that don’t warrant further comment here). Once on the plane, I had a seat row to myself and we were blessed with great views of the Pembrokeshire coast and Skomer Island.

* Meanwhile, Jacques was tending his flatworm commitments back on campus. He was not pleased to hear that I stole the better travel company.

The weather predictably failed to hold upon arrival. Jacques and I were met by cold rain followed by a brief torrent of snow. By the following day, we were back to patches of sunshine and rain. If there’s one thing we learned on this trip, it’s that priors can update quicker than you might hope – which applies to both weather and university operations.

The possibility of a closure of the university due to COVID-19 was mounting on Thursday morning, so we moved through the course content quickly. By noon, we were updated that there would only be a few more hours to learn everything there is to know about Bayesian statistics. The university was closing. It’s safe to say that Jacque and I learned a lot in that day – but mostly that Kevin Healy is a master of cram-teaching.

Day 1 – The focus of our Bayesian crash course was the practical mechanics of MCMCglmm models (Hadfield 2009;“Mac-Mac-Lamb” models) – their uses and potential misuses in the context of macro-ecology. Kevin Healy highlighted the advantages of a MCMCglmm-based modeling approach for regression-based analyses. He noted that you don’t need to be a prior-junkie or Bayesian evangelist to take advantage of the Bayesian approach and its flexibilities. Simply put, it’s okay to have uninformed priors and to be a glm-based Bayesian.

Along the way, we intersected some of the questions that have been on the SalGoers’ mind for the last few weeks: Notably, what do Bayesian approaches have to offer over Frequentist approaches? As discussed in last week’s SalGo #StatisticalRethinking group, there is a lot in common and a lot of overlap between the Frequentist and Bayesian camps [cue objections and yelling from both sides]. Many of us are yet to have conclusively resolved:

We’ll get to that.

Step 1: The theorem. We started our morning the way that most modern scientists start their morning – with a healthy dose of caffeine and Bayes’ theorem. The Bayes’ theorem reflects a deceivingly straightforward statement – the reciprocal of the probability theorem that underlies frequentist statistics. Instead of asking whether data collected is consistent with a probability statement (hypothesis) – the frequentist perspective – Bayes asks whether a probability statement (hypothesis) is consistent with the data.

What is the probability of evidence (i.e. data), given the hypothesis?

What’s the probability of a hypothesis, given the data?

So how do we get at the P(H|E)? That’s where Bayes’ theorem comes in handy. For this brief note, I’m not going to walk through the underlying maths – you can find that in most stats books – but here’s the relevant expression:

Where P(E|H) is the frequentist bit. Where P(H) is the prior. And where P(E) is the probability of observing the data (or all possible outcomes/the probability of everything). This P(E) element is a messy piece that we can ignore for now; but it is important because it normalizes the numerator.

Step 2: MCMC and Me. The power of Multiple Chain Monti-Carlo (MCMC) methods is that they eliminate that messy part of Bayes’ theorem - the denominator (representing all possible outcomes). This, to my understanding, is formally called “the overly complex part of the equation that you shouldn’t worry about.”

The model allows movement across parameter values according to specific rules/algorithms. As noted, this starts with the model looking at a neighboring parameter estimate and determining whether its current position is a better or worse fit (based on residual error with the observed data). If the neighboring estimate is better, it will move there, but – and this is key – only with a probability proportional to the difference in error (or some similar rule, depending on the specific algorithm). This probability piece affords room for the model to explore different parameter spaces, generating semi-random, error-minimizing exploration of a wide set of parameters.

The outcome of an MCMC simulation – which iterates thousands to millions of events – is a model that moves to and spends the most time/number of iterations within parameters of best fit. The model still spends time/iterations in parameters of less good fit proportional to the marginal improvement of the model fit, and in turn, with the probability that the parameter generated the data. Since the model uses neighbor-comparison as its rule for state-changing, it relies on a contrast ratio (fit 2/fit 1 > 1, then P(state 1

I’ll spare the conversation about tinkering with specific models, burn-in, iteration counts, and so forth. The course was very helpful for walking through concrete examples of Bayesian tools to evaluate regression models.

Step 3: Priors. One of the biggest differences between the Bayesian approach and Frequentist approach is the existence of priors. The prior probability allows you to either clip out impossible values of a parameter distribution, or formally weight the distribution toward values as a function of knowledge about the system you are modeling. In either case, model fits improve as more constraints or prior knowledge is incorporated into the model (assuming it is accurate information).

Since priors can control the posterior distribution generated in Bayes’ approaches, you need to be thoughtful about the priors you choose. This seems to be one source of high contention between some Frequentists and Bayesians.

Back to that first question. Where do Frequentists and Bayesians break from one another? Kevin Healy raised a point that was novel to me about this question: In general, when you add more information into a Frequentist’s model without more data, you get into a situation where your likelihood estimates result in a division by zero, and the model computationally errs. By contrast, a Bayesian framework is prepared to accommodate lots of informational input and to estimate lots of parameters without running into impossible solutions. The long and short of this: You have flexibility to generate more complex models as well as incorporate more information into a simple model.

When you truly don’t have any informed priors (i.e. you’re using a flat, uniform prior), then the Frequentist and Bayesian approaches are materially one in the same most of the time. The main difference is different interpretations about the outputs (p-values versus posterior densities). But if you have priors - and many a Bayesian will tell you that you have more priors that you’re aware of - then the Bayesian approach will improve your model fit. If you’re running up against high-parameter estimation challenges, Bayes might also be your friend.

In the context of macroecology, Bayesian tools can be a liberating choice insofar as they free-up parameter estimation. Bayesian models are great at integrating lots of informational inputs as one might face in macro-ecological contexts. There is, of course, the converse consideration. We should not take Bayesian tools as license to complexify models for the sake of making them more complex; the biology should steer the level of complexity in our models. 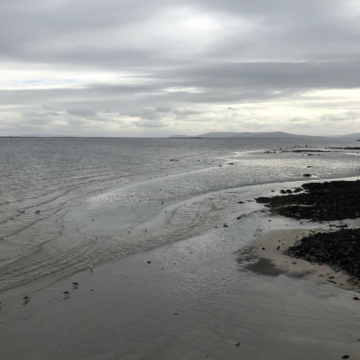 The view from Rintinane Fort. A line of Oyster Catchers on the far left.

Days 2/3 - Jacque and I did our best MCMC impression, making our way around the city of Galway, randomly walking in search of better espresso. After a thorough but haphazard trip around the city, our top recommendation: Pascal’s - a quality cup in a neat little nook of downtown. After the obligatory stroll down the long walk, we made our way to the shoreside of Claddagh, Rintinane Fort, and Mutton Island. We found a vibrant bunch of Oyster Catchers (Haematopus ostralegus), stonechats (Saxicola rubicola), and a few feathered friends that we were about 70 percent sure were ringed plovers (Charadrius hiaticula). After an update from Jacque’s eBird maps, let’s call it 80 percent. Truth be told, I was equally captivated by the hooded crows (Corvus cornix) in downtown. I have a thing for corvids. Many a wool sweater shop later (and thoroughly impressed by the Aran Island knitwear), we ended our evenings with a swift half at the public house where we were warmly greeted by regional pub songs, along with a healthy dose of the Kilkenny’s and Oasis.